Above - Christoper Bainbridge, Cardinal, Archbishop of York, Primate of England 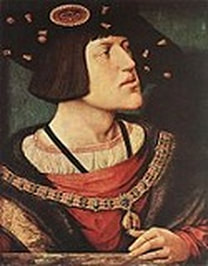 Archduke Charles
​Henry was engrossed in the details of Mary’s wedding, which would have been a marriage to the Habsburgs – the dynastic arch-enemy of the French Valois.

Wolsey, on a path heading in the opposite direction, circumvented the anti-French Bainbridge, who, increasingly isolated, was highly sceptical of what Wolsey was doing with foreign policy behind the king’s back, negotiating peace with France.

As important to Wolsey as implementing a pro-French policy was that he wanted to oust Bainbridge. He wanted to take over for himself not just the archbishopric of York but Bainbridge’s cardinalate as well, and so he employed his own man, Silvestro de’ Gigli, absentee Bishop of Worcester, to secure his wants in Italy.
In July 1514 Bainbridge was murdered.
Mary's Wedding to Arch Duke Charles is Off - A Marriage to the King of France Instead 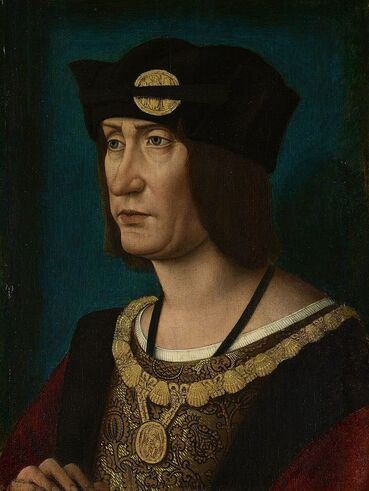 With spectacular momentum, Wolsey then became Archbishop of York, and, by the time the news of Bainbridge’s death had travelled the twelve hundred pot-holed miles from Rome to London, he had the archbishop’s milliner at work on a hat for his own head.

It is probable that Thomas Cromwell was working for the Archdiocese of York at the time.

It seemed Wolsey’s fortune had no bounds and his efforts with the French and the pope succeeded, at least for him. He brought England in line with papal policy. Mary’s long-standing marriage contract to Charles remained unfulfilled; the contractual stipulation that it should take place by 15 May 1514 had been breached long since. With his sister jilted so near, and yet so far, from the altar, young Henry Tudor was on the brink of dynastic humiliation at the hands of the Habsburgs and the Trastámaras. Wolsey, naturally, had everything in hand, and rescued him with a spectacular face-saving act of retribution: Mary overtly repudiated Charles and then contracted to marry the fifty-two-year-old King Louis XII of France and create a union with the Valois dynasty instead.

She was crowned Queen of France on 5 November 1514 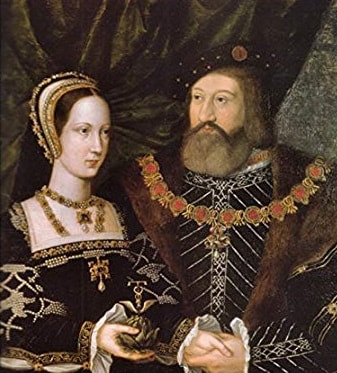 Mary and Brandon
The pope demanded credit for Mary’s marriage, effectively a marriage of England to France, but was worried that his plan was not sufficiently appreciated. To remedy this, Wolsey arranged to have the papal influence mentioned, with honour, in the marriage contract, which he thought would bind the pope to grant the cardinalate Wolsey so desperately wanted.

Now Henry gave Wolsey his support, and in doing so bowed to the power of the cleric. On 12 August 1514, Henry wrote to the pope requesting him to make Wolsey a cardinal, with all the honours held by the late Cardinal of York. Henry said that Wolsey’s merits were such that he esteemed him above all his other dearest friends and could do nothing of the least importance without him – true words indeed.

The Mary–Louis marriage was a short one. The king died on 1 January 1515. Whether a compliment to the king’s efforts or lamentation for his poor health is not entirely clear, but some jibed that it was either the consummation or an inability to realise the consummation act that killed him. Whichever it was, Mary was not unattended for long, because her brother’s jousting compatriot, Charles Brandon, who had gone to collect her from France, married her on the way home to England. One of her attendants, however, remained in France for some time and she has become known over the centuries as Anne Boleyn. 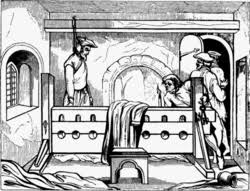 Richard Hunne
With a cleric running the kingdom, a certain Richard Hunne was found hanging in his cell on 4 December 1514. He was being held on charges of heresy but had disputed the legality of clerical authority in a secular court. The circumstances were suspicious, and ever since murder, not suicide, has been suspected. The Hunne affair is often cited as the first event of the Reformation in England; be that as it may, other anti-clericalists were beginning to stir.
Supplement to Part 4 – Dynasty

Dynastic machinations are exemplified in the matrimonial union of Henry VIII’s younger sister, eighteen-year-old Mary, to the widowed fifty-two-year-old King of France, Louis XII in 1514.

Henry VII, Mary’s father, years before, in 1507, had negotiated a marriage contract with Holy Roman Emperor, Maximillian for Mary – eleven years old at the time – to his six-year-old grandson Charles, the future King Charles V of Spain and Holy Roman Emperor.

Charles’ father Philip died in 1506 at the age of twenty-eight. Maximillian was his paternal grandfather; his maternal grandfather was Ferdinand of Aragon, Catherine of Aragon’s father. His grandparents assumed responsibility for the boy’s future.

Henry VII had died in 1509, and by 1513 Thomas Wolsey was ruling England. Wolsey, consistent with the papal policy dictated by Giuliano Della Rovere, Pope Julius II, known as the Warrior Pope, was making war on France. He was allied on the battlefield with Maximillian. Thus far Charles and Mary had not met, the administrative duties of the marriage had been performed by proxy, but now a new treaty was made which stipulated that the union should be completed, in person, in Calais, not later than 15 May 1514.

As Wolsey and Maximillian were hammering out terms the Warrior Pope, in Rome, died. A new pope was elected, and the de Medici family, in the form of Giovanni di Lorenzo de' Medici as Pope Leo X, moved into the Papal Palace, and in an about turn, he pursued a policy of peace in Christendom.

Taking his lead from the new regime in Rome, Ferdinand of Aragon made peace with France. With a new order in Christendom, he had other plans for the future of his grandson. Henry VIII was in the thick of the marriage arrangements for his young sister, oblivious to the political intrigues until it became obvious that Maximillian was about to renege on the 15 May deadline.

Charles would be married elsewhere to another person at some other time.

Humiliation loomed, King Henry VIII sister all but jilted at the altar, but the scheming Wolsey had plans afoot.
The Cardinal, with no small ballyhoo, had Mary repudiate the marriage contract to Charles and with no less commotion and ceremony pledged her in marriage to the king of France. Mary was shipped off to Abbeville to be married. She took with her a large retinue of ladies from the English court – most of whom, after the ceremony, Louis packed off back to England. The marriage was short-lived, Louis died less than three months later.

The Foreshadow of Anne Boleyn
The was a ‘Boleyn girl’ that remained with Mary’s diminished retinue. It is not clear however whether the ‘Madamoyselle Boleyne’ in the records of those who remained was Anne or her sister Mary.

It is known that in 1513 Anne’s father, a senior diplomat was on good terms with the Regent of the Netherlands Margaret of Austria. Margaret ruled on behalf of her thirteen-year-old nephew Charles – later Charles V – and her court was at Mechelen, fifteen miles north of Brussels. Eric Ives describes it as ‘Europe’s premier finishing school…’

At the time of Mary’s repudiation of Charles and pledge to marry, instead, Louis XII, Thomas Boleyn asked for Anne’s release back into the care of the escort who had brought her from England, and from there for a while, she is hidden in the shadows of history.

Following the death of King Louis, Francis I became king of France. Francis was married to Queen Claude, and at sometime, Anne Boleyn entered Claude’s household– quite how is a mystery.

There are a number of theories as to how this happened. However, the most plausible is that Anne left Mechelen and joined Mary’s retinue and on the king’s death took up with the new queen’s cortege where she stayed for several years.

In the Upper Loire at Amboise and at Blois it seems inevitable that there would have been a coalescence of the households of Claude, Francis’s mother Louise and his sister Margaret of Angoulême.
​
The details are shadowy, but it id certain that Anne Boleyn spent quite some years at the two of the finest courts in Christendom, and in doing so became a wholly French, erudite, politically astute and voraciously ambitious woman who would later drive herself to become Queen of England, claiming a French royal pedigree. 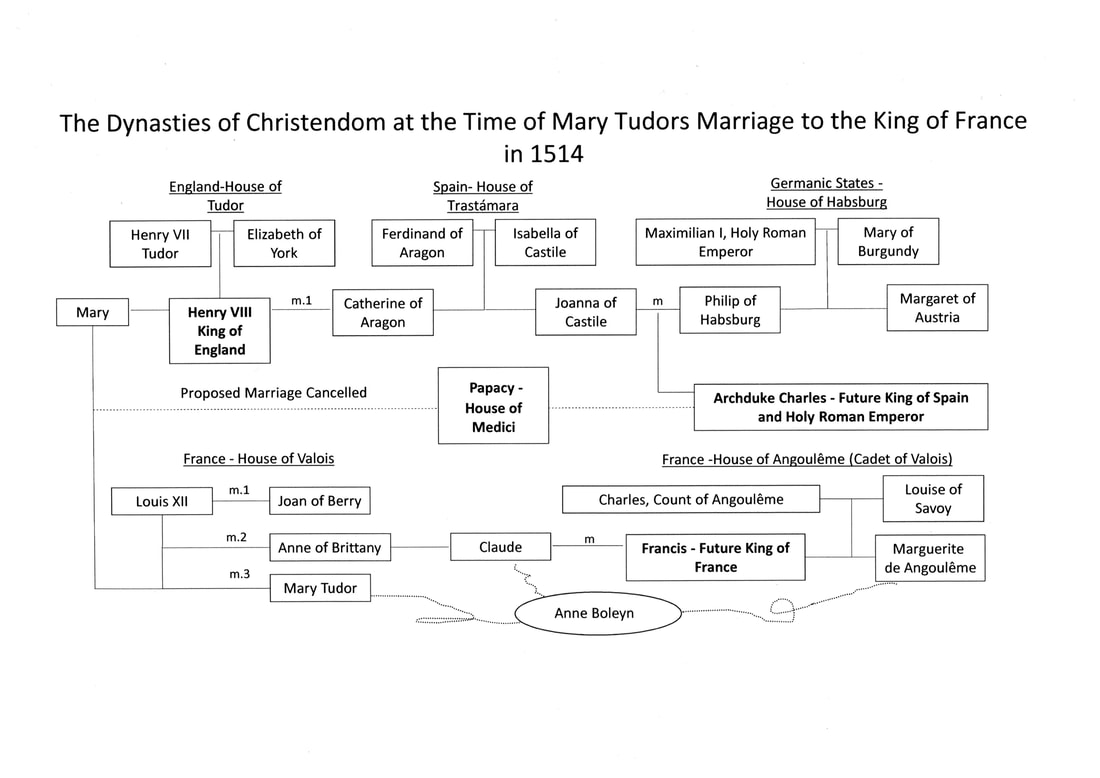