​Henry VIII, the Reign - the Blog

It is something of an achievement for a historian to secure broadcasting time on one of the major UK TV channels. It is quite remarkable to secure two hours on a major TV channel on a Saturday night between 8 and 9 pm.

Historian Doctor Suzannah Lipscomb ought to be applauded for just that.

The programme; Anne Boleyn: Queen for a Thousand Days was broadcast on Channel 5 last Saturday.
​
Well, she wasn’t queen for a thousand days, but don’t let the absence of fact in the title spoil things – yet. The documentary is otherwise billed as Henry & Anne: The Lovers Who Changed History – now, that is an overblown statement to worry about.We are told;
Heady stuff!

​Now, let’s see how it all happened. The programme is underway, and first stop is Hever Castle, Anne’s ancestral home. Here a fantasy scene of young lovers Henry VIII and Anne Boleyn running, seemingly carefree around the maze, in slow motion.

After a brief look at the castle and Anne’s bed room is seems as though we are getting down to the real historical stuff, there must be something new of our history to tell in this, surely.
​
Unfortunately, it is not yet apparent. The back bone of this history is something that Anne wrote in her book of hours.
Anne’s ‘prophetic and powerful statement.’
’The time will come. I Anne Boleyn.’

Although we don’t know where, when or why this was written in Anne’s book, it is a ‘prophetic and powerful statement’ according to Doctor Lipscomb, from which she deduces that Anne believed she was destined for greatness. The phrase is repeated in subsequent scenes.

But surely ‘the time will come’, could be applied to almost anything, there must be infinite interpretations. Nevertheless, on we go to the next scene. Henry is sword fighting, he is an all-round good guy, he is good looking, great at sports, and, perhaps, the Venetian Ambassador, Ms Lipscomb surmises, had a crush on him – no mention of the fact that at that time Henry’s so called ‘minions’, those ‘young men in his privy chamber’, in something of a scandal, were expelled from court for their childish behaviour.

As the presenter admires Henry’s love letters to Anne, she laments.
"When historians study Henry and Anne much is made of the dark political forces manoeuvring behind the scenes to unite or separate this couple, and what is lost among affairs of state is the fact that there was a very real love affair between two individuals."
​Such a love affair, if there ever was one, which is doubtful, cannot be lost. It is integral; the relationship was an affair of the state. It is quite impossible to have a meaningful account, however remotely factual, of anything of the relationship of Henry VIII and Anne Boleyn unless you have at the heart of it the affairs of state – otherwise, it is meaningless.
A Documentary Bereft of Facts
Precious little mention of the power struggle in Christendom between the great dynasty’s of Trastámara, Habsburg and Valois, which shaped England’s future, king, queen and all.

There is but one mention, and that in passing, of Cardinal Thomas Wolsey, who was probably the man who instigated the king’s break from Catherine and match with Anne.

Nothing on Martin Luther, no mention of the Eltham Ordinances, the war with France, the Sack of Rome, Anne Boleyn’s letter to Wolsey, the attack on the Clergy and so on and so forth – nothing whatsoever to support the claim that these two were The Lovers Who Changed History.
​
Discard the factual determining forces – instead, the Henry 4 Anne Show, for ‘evidence’ turns to a gold whistle pendant complete with ear wax scoop – yes, a scoop for digging out your ear wax. It was, ‘supposedly’, a gift from Henry to Anne and includes a built-in tooth pick and some other gadget. From this, we are invited to accept that the meaning behind the gift - that is if Henry did give it to her in the first place - is that if Anne whistled, Henry would come running.

And so back to another session of running around the maze – in slow motion – surely, it’s time to reach for the TV remote and turn the silly ‘show’ off.
But wait! Here comes the coup de gras, the something new to tell 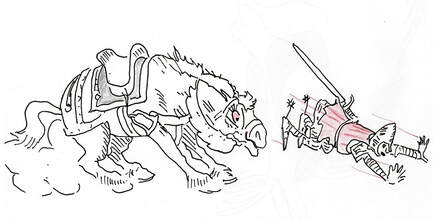 Here it is! Henry fell off his horse all clad in armour in a jousting accident and banged his head.

This is serious stuff; the scene is now set in the Pathology Museum with another doctor. Between them, they speculate on the force of the impact, and then, all these centuries later miraculously identify the very part of Henry’s brain that could have caused a change in his character. The brain injury that he might have suffered might have been responsible for Henry’s ‘very grumpy’ behaviour, and thus changed the course of history.

How about that then? It’s incredible, literally.

Never mind the factual events. Never mind that the French king recently made a mockery of Henry in allowing his son to marry the pope’s niece after saying that he would never countenance it unless the pope granted Henry his divorce.

Never mind that daughter Elizabeth’s marriage union with French royalty had been rebuffed because of doubts over her legitimacy.
​
Never mind that the pope had issued a brief depriving Henry of his realm – yes, the whole kingdom – and that the French king had been entrusted with the execution of kicking him out of England.

Never mind that wrecking ball and gunpowder were out to demolish the monasteries and rebellion was in the air.

Never mind all that, and a whole lot more affairs of state which determined these two’s fate – it was that bang on the ‘ead wot dun it.
​
Henry & Anne: The Lovers Who Changed History – Abetted by a Bang on the ‘ead

This Broadcast was the epitome of all that is wrong with the telling of the history of the period
​
I maintain that Tudor historians have devoted too much attention to the man that was Henry VIII to the detriment of our understanding of events and other more influential figures of the time, and this programme was the epitome of just that.

‘Dumbed-down tommyrot’, it was called in the Daily Telegraph and branded deleterious – look up that word if you will, its near perfect.

These two hours of broadcasting ‘history’ was made up of fantasy and fairy tales. This sort of stuff does nothing but damage our understanding of history, not just of England but also the history of the wider world.

This sort of stuff is poisonous to our understanding of the past.
​
As for the presenter, however, she must be congratulated upon securing a place on prime time T.V.