​Part Twelve
The Mythical Amicable Grant
​
John Cavendish (on right, in red with a lance) at the slaying of Wat Tyler 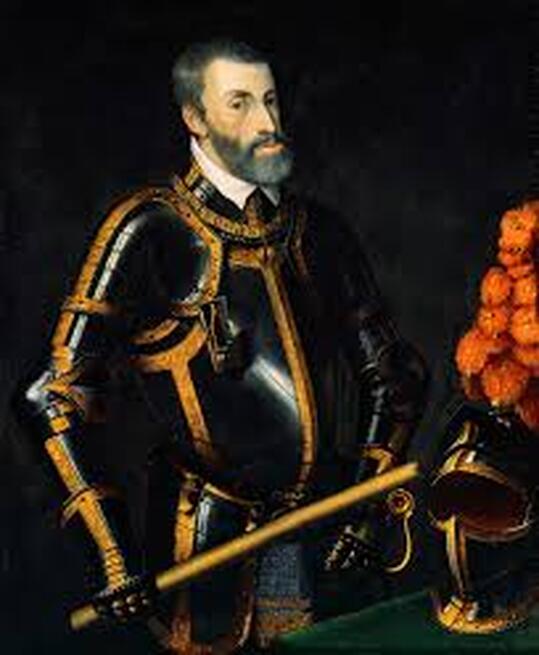 Catherine of Aragon's nephew, King of Spain and Holy Roman Emperor Charles V
Henry’s vision of a gallant, chivalrous expedition required finance. Whoever’s idea it was to raise the levy known as the Amicable Grant, must have known such a demand for money would fail. After all, the subsidy of 1523 was still being collected. A war now for which Henry VIII’s subjects must dig into their coffers and pockets, Wolsey must have known, was sure to generate vehement opposition.

For good measure, the cardinal made sure it did.

The most violent of the ensuing protests were in Suffolk in villages surrounding that of Wolsey’s gentleman usher George Cavendish, whose great-grandfather had put down the uprising of Wat Tyler and the peasants’ poll tax revolt of 1381. Cavendish’s, and indeed Wolsey’s, fellow Suffolk men were pardoned by the king in May, in London, and consequently were supplied with more than enough cash and a piece of silver to cover their time in gaol.

In an outcome reminiscent of the poll tax riots, the initiative to raise funds failed for Henry, but it was successful in buying the cardinal time to rethink his designs. There would be no more invasions of France while Wolsey was alive.

It was soon established that Charles, in Spain, was to have no share in Henry’s dream to divide France.

Charles knew about John Joachim and his secret negotiations on behalf of the French king’s mother. Charles knew about Wolsey’s interceptions of the Imperial ambassador Louis de Prate’s diplomatic bags and arrest. He knew about Wolsey’s vulgar tirades, in which he had called the emperor a liar, Lady Margaret a ribald, Archduke Ferdinand a child and Bourbon a traitor. Charles was already preparing to shun Princess Mary and take a Portuguese wife.

In return, Charles said of the cardinal, ‘Wolsey was a selfish and avaricious man, on whom no reliance could be placed.’ Disappointed in his ambition, and ungrateful for the many favours received, he fancied that his failure at Rome was entirely owing to Charles’s ambassadors, whereas nothing had been omitted to promote his election to the Pontificate.

The time had come for Wolsey to tell Henry VIII that England had long since changed sides. Those whom Henry understood to be his friends were his enemies, and his enemies were now his friends.