​Thomas Culpeper was a wealthy man who in 1541 held a privileged position as a member of Henry VIII’s Privy Chamber.

A year before, the disastrous ‘blind’ marriage of Henry VIII to the German, Princess Anne of Cleves, had brought about the downfall of first minister Thomas Cromwell.

After Cromwell’s execution, the Duke of Norfolk Thomas Howard, ably abetted by the Bishop of Winchester Stephen Gardener, established their rival faction in place of the fallen Cromwell regime and sealed their new authority with a marriage contract between Henry VIII and Thomas Howard’s niece, the new queen, Catherine Howard.

Catherine was eighteen years of age and Henry VIII fifty.

The newly married king, (albeit his fifth marriage) never a man for administrative duties, took his pleasure and leisure in the Privy Chamber, alongside the like of the twenty-seven-year-old, Howard relative, Thomas Culpeper.

Henry VIII’s Privy Chamber was a series of private rooms in the palace or house in which he was living at the time. The members of the chamber organised hunting expeditions, pleasures and pastimes, and Culpeper was a favourite of Henry, a man who the king trusted and who was described as ‘a beautiful youth’.

Beautiful, it seems, in particular, to the ebullient, unchaste, teenage Queen Catherine Howard.

Since the rebellion in the north of England of 1536, known as the Pilgrimage of Grace, a promise to visit York, the de facto northern capital, remained unfulfilled – until now.

On 1 July 1541 a great royal train arrived at Enfield from Westminster on the first leg of the two-hundred-mile journey north to Yorkshire, Thomas Culpeper was with it. The king, queen and an entourage of several thousand moved off. They would be away on the royal progress - royal tour - for nearly four months.

Stopping off at, among other places, Ampthill during July, Collyweston during August, and as the month turned into September, the train was at Pontefract. York was visited during the middle of that month for a planned meeting with the King of Scotland, but unsurprisingly King James did not turn up. More time was spent in and around Hull reviewing the North Sea fortifications, or more pointedly the lack of them.

It is unlikely that Queen Catherine was consulted or indeed present when the draft plans for Hull Castle and its improved block house fortifications were drawn up. It seems more probable that the queen had by that time, in the altogether, abandoned her own defences and surrendered to Thomas Culpeper’s advances.

On Allhallowtide, 31 October 1541, the royal party arrived back at Hampton court. 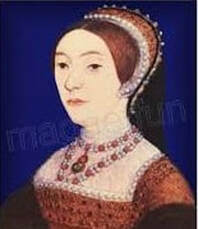 A painting reputed to be of Catherine Howard
Catherine may have been pleased to be home, but there was trouble in store, hardly time to unpack the royal wardrobe. Thomas Cromwell had suffered the axe to his neck, but his faction was still alive and looking for revenge. While Henry and Catherine had been in Yorkshire, this group had sharpened its long knives.

​At All Souls Day mass on 2 November, the innately naive Henry gave thanks to God for the gift of his sweet matrimony to his young wife, Catherine, with whom he had ostensibly shared the last four months away in the north. She was his ‘rose without a thorn’. Henry then opened a letter from Thomas Cranmer, the content of which plunged his fifth marriage into turmoil.

The evangelical accusers apparently had not the heart to tell the king face to face and so had Cranmer spell out the details writing.
​
The bitter gist of the letter was that this ‘rose without a thorn’ had been deflowered long ago; indeed, the birds, bees and any number of the Privy Chamber had been busy with Catherine long before Henry ever married her. If that were not enough for Henry, it was then that he discovered that his loyal, trusty friend Thomas Culpeper had kept Catherine company in bed throughout the progress in the north. It was from the heat of Tom’s love, not Harry’s that his wife had radiated her ebullient spirit.

The king at first did not believe the sordid tales about his wife’s promiscuous adulterous behaviour. At first, he was calm, and he ordered further investigations, but he was fooling himself, and, when Cranmer returned with even more evidence about her bedtime romps, distraught, the sick and ageing monarch broke down and sobbed. 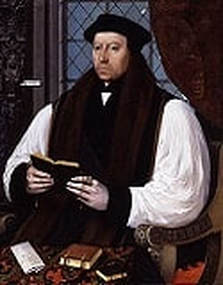 Thomas Cranmer
Of her past, it was claimed by a former housemaid that ‘there is one Francis Denham, who was servant also in my lady of Norfolk's house, which hath lien in bed with her in his doublet and hose between the sheets an hundred nights. And there hath been such purling [there are definitions available!] and blowing between them, that once in the house a maid which lay [lived] in the house with her, said to me She would lie no longer With her.because she knew not what matrimony meant. And further, she said unto him, that one Mannock, sometimes also servant to the said duchess, knew a privy mark of her body.’

The Privy Council wrote to William Paget, English Ambassador to France, informing him of the grave situation at home. ’But what inward sorrow the king’s majesty took when he perceived the information true, as it was the most woeful thing that ever came into our hearts to see it; so, it were too tedious to write unto you. But his heart was pierced with pensiveness that long it was before his majesty could speak and utter the sorrow of his heart unto us; and finally, with plenty of tears, which was strange in his courage, opened the same.’

There were suggestions that Henry had gone mad. French ambassador Marillac wrote to King Francis of France on 7 December 1541 and informed him that ‘this King has changed his love for the Queen into hatred and taken such grief at being deceived that of late it was thought he had gone mad, for he called for a sword to slay her he had loved so much. Sitting in council, he suddenly called for horses without saying where he would go.’

And so there followed another sad end to yet another marriage.

For political ends, Henry had been duped again, like his previous four marriages, people wiser than this king, had used him to satisfy their own ambitions. Henry VIII himself conceded that there were those about him who ‘under pretence of serving him, were only temporising for their own profit’.

Unlike stronger monarchs, this Henry was not sufficiently deft of mind to see off those who were more skilled in politics than he.

Queen Catherine was condemned by a bill of attainder and executed on 13 February 1542. Thomas Culpeper and Francis Dereham were executed some weeks before, on 10 December 1541.

From this wretched episode emerged a king who for the first and only time in his reign – to repair his ego and rebut mockery from the French king – attempted some control of government himself.

He started another war with France.

That conflict was highjacked on the one side by the Howards and on the other by the Seymours, and in the end, the Seymours won. It ended with the disastrous loss of one of the most famous of ships, the Mary Rose.

While Henry lived, there were schemers who for their own ends would have Henry VIII married to a woman of their choice to create an alliance to suit the ambitions of this faction or that.

With five marriages down a contrived sixth was inevitable. The contrivance came in the form of the envious power lusting uncle of the future King Edward VI, Thomas Seymour, he was a pimp who gained control of Catherine Parr.