A New Look
The Book
By Mark Holinshed 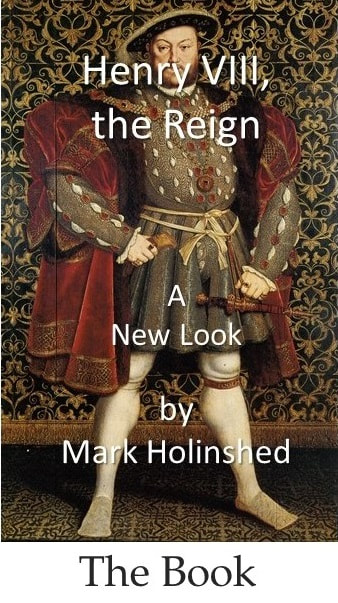 A popular image of Henry VIII is that he was something of a hot-blooded womanising, fornicating tyrant who broke with Roman Catholicism to divorce and remarry over and over again.

Henry VIII was ‘a veritable Bluebeard ‘who died of an excess of food, drink and sex – or was he?

Henry VIII, the Reign a New Look does exactly what it says on the cover, this concise book takes a new, fresh and innovative look at the reign of Henry VIII.

There was more to the period than the man that was Henry VIII. The eminent Tudor historian Sir Geoffrey Elton once said of him ‘… we surely cannot accept an argument unsupported by evidence which ascribes to him alone the mastery of events, the making of policy and the detailed and specific government of the country.’

Sir Geoffrey was quite right, the evidence is just not there – it does not exist – to support the popular image of Henry VIII.
​
The events of the reign, however, can be ascribed to other more influential people than this fickle, malleable and ill-equipped man who was Henry VIII, King of England.
Read Before You Buy - Henry VIII,the Reign - A New Look

This book uses the evidence to support a new look at the tumultuous reign of Henry VIII, backed up by hundreds of corroborating documents compiled from the vast  Calendar of Letters and Papers, Foreign and Domestic, of the Reign of Henry VIII: preserved in the Public Record Office, the British Museum, and elsewhere in England, together with maps and illustrations.

These are not merely footnoted – references but are the full, detailed Calendar entries, transcribed word for word – these are the facts.

The eBook edition facilitates the inclusion of the documentary evidence directly accessible within the publication – that is to say, the transcriptions are included in the eBook.

The paperback is supported by two paper volumes of the transcriptions in Henry VIII, the Reign-the Notes (Part 1 and Part 2) which may be purchased separately.

Alternatively, all the notes are available on the website Henry VIII, the Reign – for FREE.