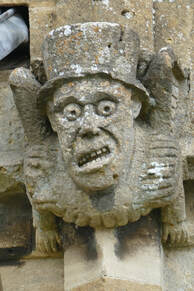 A Winchcombe Gargoyle
For the winding royal train, the journey from Langley to Winchcombe was one of over twenty miles, traversing the Cotswolds, those rolling hills where the wealth of the wool merchants prevailed but in a declining industry. The court was never far from a ‘wool church’, a house of God built during the preceding centuries with money from the profits made by merchants and farmers from their dealings in the wool trade.
​
Somewhere they crossed the Roman Fosse Way, at Stow on the Wold probably, and onward through villages built from warm Cotswold stone, many of which have changed little to this day.
​
With an hour of daylight remaining the royal train arrived, edging its way down the steep hill into Winchcombe where many would be lodged at the Abbey. Unusually nothing remains of the monastic building, not so much as a trace. Dissolved and demolished in 1539, in its prime however it boasted  considerable wealth and owned over twenty five thousand acres including Snowshill Manor and  the great structure dominated the town.

For all its influence and elegance however, Cromwell’s grip was tightening, new rules were imposed and Abbot Mounslow did not much like them; 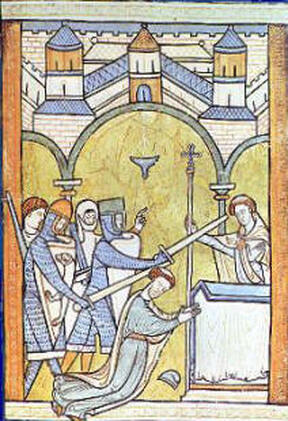 ‘Thus perishes a traitor!’
Thomas Becket
​
At Sudeley Castle, the wholly French Anne de Boulogne would have been reminded, that it was ravaged for years in the civil war between Matilda and Stephen and taken as a garrison by Stephen. Here also once lived John de Sudeley, father of William de Tracy (his grandfather was an illegitimate son of King Henry I) one of the knights who murdered Thomas Becket at Canterbury in 1170. The story recounts that William, placing his foot on the dying prelate’s neck, exclaimed, ‘Thus perishes a traitor!’

The Tracys Live On at Nearby Stanway and Toddington
​
When the royal train arrived, and edged its way down the steep hill into Winchcombe, in 1535, William’s descendant Richard Tracy held the manor of Stanway, a little over three miles away (he also had property at nearby Toddington). The manor was owned by Tewkesbury Abbey, but two years earlier Cromwell had obtained the lease for Tracy. There had been trouble with the Tracys quite recently, and it was still fresh in the memory.
​
Richard was a younger son of another William Tracy. His father had died in 1530 and had made a will in which he refused to bequeath anything ‘for that intent that any man shall say or do to help my soul’, thus insulting the Catholic church. When the will came to be proved, it was referred to the Convocation of Canterbury, and on 23 March 1531 it was condemned as heretical. 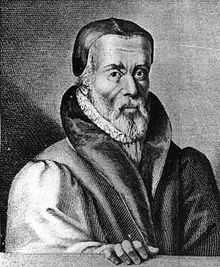 Thomas Parker, Chancellor of Worcester, was subsequently instructed to exhume the body of William and proceeded to have it burned at the stake.

Parker may have believed he was working within a law that had been enacted in 1401: the statute known as the De heretico comburendo which required the punishment of heretics by burning at the stake. It was devised to wipe out Lollardy and punish ‘divers false and perverse people of a certain new sect … they make and write books; they do wickedly instruct and inform people … and commit subversion of the said Catholic faith’. Chancellor Parker, however, had not obtained the necessary writ to authorise the burning of the body – in the changing political climate it seems doubtful that he would have obtained it anyway – and thus he was fined £300.

Worse for the Catholic Church, the arch-Protestant Wycliffe apologist William Tyndale lauded William Tracy as a martyr and published Tracy’s will with a detailed commentary on it in his treatise ‘The Testament of Master William Tracy Esquire, expounded both by William Tindall and John Frith.’

Emboldened by Tyndale, over the next decade Richard Tracy embarked on many an evangelical discourse.

Tyndale was vicious in his opposition to Henry’s marriage to Anne de Boulogne. At that time he was living in hiding in Antwerp but about to be seized and imprisoned – more on that later on the tour.
At Winchcombe, the king’s first minister Thomas Cromwell joined the royal party, and records survive of him dealing with the everyday business of government, and because of his attendance on the king, he was unable to confirm a date to his correspondents when he would be back in London from the tour. 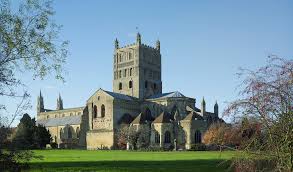 Winchcombe to Tewkesbury is a little over ten miles, and the most northerly point listed as being visited on the progress.

There is no record of where the royal party lodged in Tewkesbury therefore although the royal household did stay in the city for several days. Cromwell’s efforts with the Abbot of Tewkesbury to get Toddington for Tracy is perhaps sufficiently convincing to conclude that the royal party lodged at Toddington Manor – hosted by descendants of Thomas Becket’s murderer.
Even today there is controversy at the manor which is owned by artist Damien Hurst - Daily Mail Article 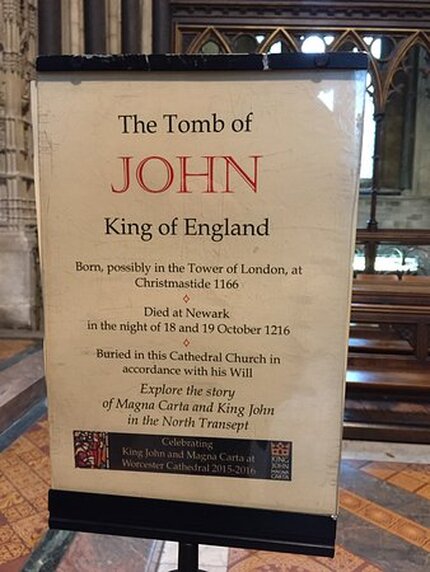 King John's Tomb is at Worcester Cathedral Church
The bridge over the River Avon in Tewkesbury today still bears King John’s name, and his body is entombed a few miles away at Worcester. He chose to be buried there, near to the shrine of his favourite saint, Wulfstan I.

​It was from here that King Henry VIII’s Lancastrian father, the future Henry VII, fled after the battle of Tewkesbury in 1471 to Brittany. He later returned, in 1485 through Wales and the West of England, gathering support to defeat Richard III at Bosworth and claim the kingdom for the Tudors.
​
Henry VIII's older brother Arthur is also buried at Worcester.

The abbot who gave over Stanway to Tracy died in 1534 and was replaced by John Wyche (also known as Wakeham). During the royal progress’s visit to Tewkesbury, Wyche promised Cromwell a gelding, which, together with thanks for his preferment, he duly sent him that autumn, along with five shillings to buy a saddle. In the guise of his alias, Wakeham, he became the inaugural Bishop of Gloucester in 1541.

​Cromwell’s family hailed from the shadows of Southwell Minster and Newark Castle where King John died. His forefathers rubbed shoulders with the Sheriff of Nottingham and John’s ‘evil councillors’. He and his faction would have visited Worcester Cathedral and paid tribute to him there.
Map of 1535 Royal Progress