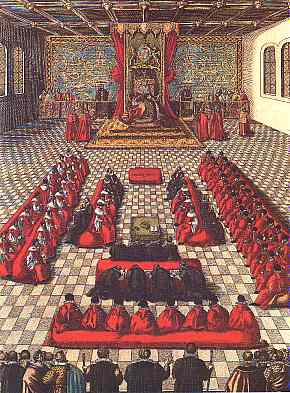 In the real 1535 Wiltshire was the wealthiest and most influential county in the country. ‘In the early 16th century Wiltshire was one of the chief industrial centres of England, with a flourishing cloth trade, mainly in the west of the shire but extending south-east to Salisbury and Wilton.’

Wiltshire was at the centre of the political and religious change that took place in the 1530s. The county boasted vastly more Members of Parliament than any other in the country, indeed almost double the second-placed, neighbouring Dorset. Within a year it would provide the next queen of England by way of a political marriage and give legitimacy to a new government the instigators of which owned Wolf Hall in Wiltshire – the Seymours.

The Seymours wielded substantial power in the west of England. Originally of Norman descent, the family had first settled in South Wales before two shrewd marriages enhanced their fortunes further. The first to the Beauchamps of Hatch in Somerset and the second to the Sturmy (Esturmy) family whose landed estates centred on Wolf Hall.

Sir Thomas Beauchamp, (d.1444), a young son from the Beauchamps of Hatch was elected five times a Member of Parliament. He was a Lollard, sometimes imprisoned as such and linked with Thomas Brooke and Sir John Oldcastle.

The Sturmeys were prolific in politics, Sir William Sturmey, (c.1356-1427) for example, had been an ambassador, courtier, Speaker of the Commons and at least twelve times knight of the shire for one or other of the counties of Devon, Hampshire and Wiltshire. From the Sturmeys the Seymours inherited the trait for political office. They also inherited lands at Wolf Hall and Eltham in Hampshire. Eltham was later on, during the 1535 progress, added to the itinerary.

Sir John Seymour (1473 -1536) was Member of Parliament for Heytesbury in Wiltshire and served as Sheriff of Wiltshire or Dorset or Somerset on numerous occasions.

When Henry VIII’s court arrived at Wolf Hall in September 1535, it was arriving at the centre of English governance – the mantle if you like – of parliamentary authority. The west of England was where the power lay, and that is why this itinerary had been chosen. 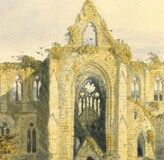 Queen Anne Working Against The Demolition of the Monasteries

Queen Anne, however, was working against the introduction of the new act. Dissolution in this context meant demolition, the great edifices that stood tall and dominated the surrounding country were not just to be closed down but pulled down with hammers, picks and if needs must gunpowder.

The wholly French Anne de Boulogne favoured reform of the church from within, upholding the Catholic and Apostolic faith, following the teachings of Jesus Christ, the proclamation of the good news of the Gospel to the whole creation. She would have it based on the revelation contained in Holy Scripture and the Catholic creeds, interpreted in light of tradition, scholarship, reason and experience – she would have retained the monastic buildings to help achieve just that.

The de Boulogne faction, however, lacked numbers, the group, a diplomat and his daughter, spawned by Wolsey had ever since been reliant on French sponsorship, a sponsorship that was evaporating – and evaporating fast.

Henry had never ruled himself; he had never led, he was a follower of his grandmother, then of Bishop Richard Foxe, of Cardinal Thomas Wolsey, the de Boulognes and now as the French sponsored family faded his kingdom would be ruled by the Seymour – Cromwell faction.
​
The royal progress was in Wiltshire and at Wolf Hall to galvanise the strength of Parliament from which the faction extracted its authority, and so its sway over both the monarch and the nobility. 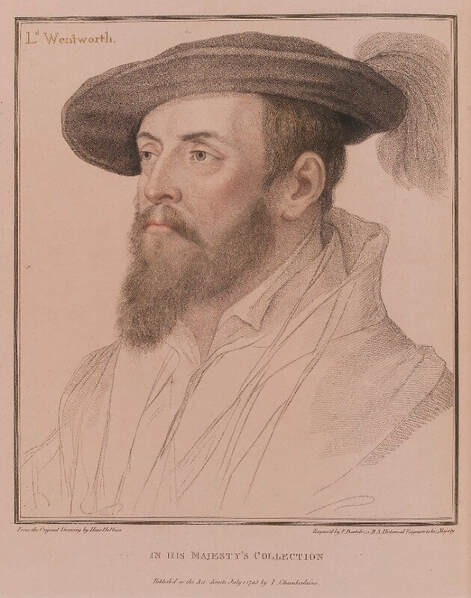 Thomas Wentworth
Propaganda – A Tragedy of John, King of England

John Seymour was married to Margery née Wentworth. Originally from the renowned Yorkshire family of Wentworth but now, for some time, settled in Suffolk. Margery could trace her ancestry back to Edward III. She had been in the service of Agnes Howard, Duchess of Norfolk, a muse for the poet John Skelton who portrays Margery as a shy, kind girl, and compares her to a primrose and a columbine.

And, Margery had a brother Thomas, first Baron Wentworth of Nettlestead.

John Bale was also a Suffolk man and a protégé of Jane Seymour’s uncle, Thomas. Bale was the most vitriolic proponent of the Seymour – Cromwell Reformation - Bale was unrivalled in his vocation of viciously attacking papists with the written word, in particular, the Catholic prohibition of marriage which he claimed encouraged depravity within the priesthood. He was commissioned by the evangelists to write polemics and plays including The Comedy of John the Baptist, The Chief Promises of God Unto Man, The Temptation of Our Lord and The Examination and Death of Sir John Oldcastle.
​
Given Henry’s undertaking  to repair the insult to Kings Henry II and John, who had been tricked into offering the realm in tribute to the Holy See, and that he was also determined to reunite the crown with the goods churchmen had appropriated from it, upon the balance of probability, it is likely that his most famous play, A Tragedy of John, King of England was given its premiere during the tour.
The Seymours Taking Hold of the Kingdom

The Seymours were at the heart of the political and religious changes taking place in England and Wales. They were in control because of the parliamentary authority they commanded from the most influential county in the country.

Wolf Hall was surrounded by politicians, and to quote Arthur Ogle;
​King Henry VIII did not control the events of his reign – others did.

There was now no place for the weak de Boulogne faction in this new order. This evangelist Francophobic ruling executive would see to that, unless of course, Anne could somehow miraculously conceive a child very, very soon, in fact within a few weeks, before they all returned home from the progress.

That was her wish as they departed Wolf Hall and headed toward Winchester. However, at the same time, a French letter from her old sponsors was also on its way to Winchester.
The Machine and The Fake Romance
​
The machine that was at work was the one owned by the Seymour – Cromwell faction. It was oiled and humming, lubricated by hundreds of Members of Parliament and the vitriol of the like of Bale and Fyllol.
There is, of course, the story that all that followed from the kings encounter with the Seymours was, notwithstanding the pre-existing religious and political state, a direct consequence of the forty-four-year-old prudish, conservatively religious, twice politically married, middle-aged man’s romantic inclinations towards Edwards sister Jane.