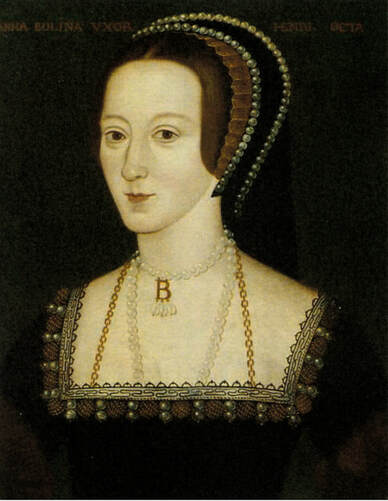 Anne de Boulogne
Back in England and with Wolsey away, Henry was spreading his wings, cajoled by his prospective queen. Unbeknown to Wolsey, on 23 July 1527 the king arrived at the Palace of Beaulieu, near Chelmsford in Essex (now New Hall School), which he had bought from Thomas Boleyn in 1516. He was joined there by Thomas Howard, third Duke of Norfolk; Charles Brandon, Duke of Suffolk; Henry Courtenay, first Marquis of Exeter; John De Vere, Earl of Oxford; Henry Bourchier, Earl of Essex; Thomas Manners, Earl of Rutland; Robert Radcliffe, Viscount Fitzwalter; and Thomas Boleyn, Earl Rochford.

These visitors, no great friends of Wolsey, had sown some seeds of doubt about the cardinal’s motives for being abroad.

While Wolsey was in France, the rumours found their way into print in England, and the reports also claimed that Princess Mary would marry Francis’s second son, Henry. Anne had detected the first hints of Wolsey’s duplicity; he had been using her. Years on from his sugar-coated promises, where was Gloriana? She was not Good Queen Anne – she was not even married to the king – and, worse, he was not even divorced from the queen. She later riled at the cardinal ‘that I have put much confidence in your professions and promises, in which I find myself deceived’.

Some of Henry’s guests who envisaged advancement for themselves probably also coaxed the king to take matters into his own hands; he dispatched his secretary, William Knight, to seek a dispensation for him to marry again without an annulment of his first marriage.

Knight was instructed to meet with Wolsey at Compiègne. However, when the cardinal discovered what was afoot, he dashed off a letter to the king urging Henry to halt this ruse. He said that Cardinal Ghinucci (Absentee Bishop of Worcester) was better qualified to serve Henry in this his Great Matter than Knight, that Ghinucci had more experience of affairs in Italy and that the Italian was better placed to approach the pontiff.

Wolsey stopped Knight from travelling on. He awaited Henry’s response, confident that with his urgent advice taken Henry would call off the mission and that Wolsey could then dispatch Knight back home to England.
His confidence was misplaced.

Henry and Anne instead issued further orders, kept secret from Wolsey, for Knight to continue on to Rome. He now had a new purpose: to obtain a dispensation for Henry to marry any woman, even one related in the first degree of affinity through either licit or illicit intercourse. This was a reference to Anne and her sister Mary. Henry had an affair with the wanton sister some years earlier, and according to the law of the day, was thus related to her.

Wolsey, however, could not find a ploy to delay Knight any longer and he continued on his journey towards Rome.

For a decade and more, the cardinal had ruled England. He alone had made and enforced policy – the autocrat extraordinaire – it was he who had negotiated with the papacy. It was he, so he thought, who would decide when, where and to whom Henry would be remarried.

Wolsey was worried now and must have sensed that all was not well for him back in England. Despite all his aspirations for Christendom, he returned apace across the Channel to reassert his authority. However, when he arrived, the welcome was cool-cold, almost. He found that Henry was now in Anne’s thrall. She wanted this divorce infinitely more than its originator, the cardinal; though he had promised it to her, Wolsey, as things stood, did not want this divorce at all. This woman and her French sponsors were usurping his power. He had underestimated the Lady de Boulogne; she would circumvent him especially in all things French, and the French controlled his route to the papal tiara.

Anne seduced politics into the bedchamber -- and continued with it between the sheets, a ploy that Wolsey could not match.
The cardinal schemed to scupper the divorce proceedings until he could reorganise his sovereign’s mind and be rid of this second Boleyn girl as he had the first, her sister, the wanton Mary.
​
But for the clergyman, the reality was dawning. The Boleyns had filched his mastery of Henry and were prising possession of the royal sanction from him.