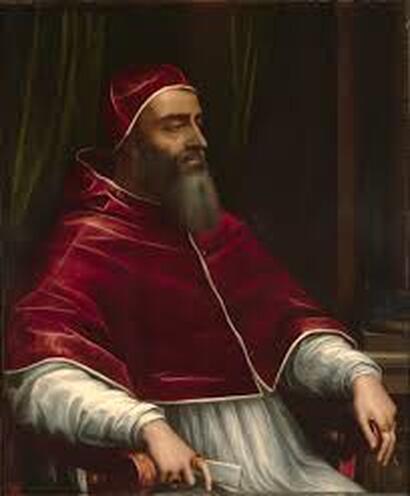 Pope Clement VII
At first, Wolsey put a brave face on it all. On the first day of Michaelmas term, he made a speech to the Lords Temporal and Spiritual in the Star Chamber about his achievements in France. He said, ‘I have knit the realms of England and France together in such a perfite knot that it shall never fayle.’ Certainly, the merchants in England were not happy when they were warned to restrict trade to Calais only and not to export goods to Charles’s dominions; the consequences of this would be financially crippling.

In the meantime, William Knight had not succeeded in Rome with Henry’s plan for a divorce.

Wolsey’s device to assume the papacy for himself also proving a failure, he sent instructions to his Italian agent, Gregory Casale. He must take over the Great Matter from Knight or, if absolutely necessary, work with Knight and obtain a commission from Pope Clement for Wolsey to hold a trial in England, with no appeal to Rome and dispensation for Henry to marry Anne.

Knight did manage to make written contact with the incarcerated Clement, but soon after that received news that the pontiff had escaped from Rome and taken refuge in relative safety seventy miles north at Orvieto, in Umbria. Orvieto is a city in a spectacular location on a hill with steep and mostly vertical sides and a flat top. Thus began a mission, a sham to bluff Henry that the cardinal was doing his utmost to serve his wishes, that went back and forth to get Wolsey the authority that he considered necessary to annul Henry’s marriage.

However, before this pretence began, on 13 January 1528 Clement and his advisers detailed what they considered to be the obvious procedure for addressing Henry’s grievance. They said that Wolsey should use his legatine authority, or the general commission, to test the validity of Henry’s marriage to Catherine. If Wolsey judged in Henry’s favour, then Henry would be free to marry Anne Boleyn. In that scenario, they said, only if the second marriage were challenged need the matter be referred to Rome.

Using that method, Anne and Henry could have been married in early 1528 instead of late 1532. Henry was either ignorant of the advice or lacked the chivalrous courage of true love; whatever the case, Wolsey continued to play for time to rid his sovereign of the Boleyn woman. As it turned out, of course, Wolsey never did make a judgement on the marriage. That responsibility fell to Archbishop Thomas Cranmer almost five and a half years later.

To complicate matters further, Wolsey, during his three months in Amiens and Compiègne, had sent instructions to the English ambassadors in Spain, Edward Lee and Cardinal Ghinucci, without the details being known to Henry.

At Burgos, the French envoys were to declare war on Charles, and their English colleagues were instructed to cooperate with them without knowing what they were going to do.

Charles rebuffed the declaration with a scathing attack on Wolsey.
​
There was an uproar in England. The announcement of war created havoc in the lucrative trading relations with Imperial Flanders. The merchants were shocked, and trade with a newly declared enemy became impossible, creating great swathes of unemployment across the country.
​