Part Twenty - Calm Before a Storm
Above - Arthur Prince of Wales

​Calm before a Storm
​ 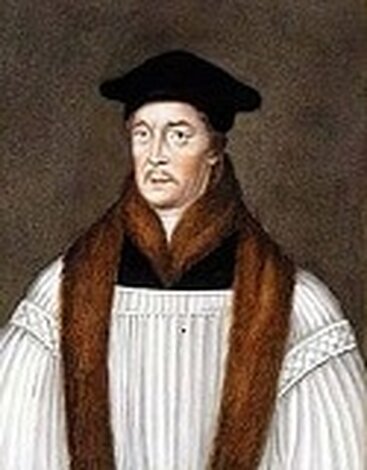 Stephen Gardiner, Bishop of Winchester
Stephen Gardiner was included in the series of delegations to Pope Clement VII at Orvieto, and eventually, on 8 June 1528, Gardiner and Casale obtained the decretal commission to allow the trial of Henry’s divorce in England with Campeggio and Wolsey presiding.

The angry merchants had their way, and on 15 June 1528 a truce was signed with the Netherlands, but it did not extend to the war in Italy, which continued.

On 27 October 1528, Cardinal Campeggio arrived, ostensibly to prepare for the trial. He found Henry determined to end his marriage to Catherine and reported that ‘an angel descending from Heaven would be unable to convince him otherwise’.

No sooner had he arrived, however, than Catherine produced a copy of what was claimed to be a brief from Julius II, remedying all the defects in his bull of dispensation permitting Henry to marry her even if her marriage with Arthur had been consummated, which she claimed it had not.

The original of this brief, it was claimed, was in Spain. If it were genuine, because Henry’s case relied on the defects of the original bull of dispensation, his cause was lost.

At the end of November, Sir Francis Bryan and Peter Vannes were sent to Rome to make a case for the document being a forgery. They were soon followed by William Knight and William Benet and then, on 22 January 1529, Stephen Gardiner was again sent to remonstrate with the pope.

In the midst of these events, news arrived that the pope had died. Wolsey reacted with all haste, prompting Henry to issue royal instructions to advocate, yet again, the English cardinal as Medici’s successor.

The news was wrong. The pope was ill, but not terminally so; however, he was not yet well enough to give proper consideration to the problems arising from the sudden production of the brief.

On 21 April 1529 in Rome, Gardiner wrote a personal letter to the king saying that all that could be realistically expected from Clement was prevarication and delay over the brief, and indeed anything else to do with the divorce. The pontiff was in poor health, and Gardiner’s advice was to let Campeggio and Wolsey proceed with the trail in London.

It was on the same day that the pope himself wrote to Henry regretting that he could not pronounce the brief a forgery without hearing both sides.

Gardiner, by instructions dated 7 May 1529, was called home; his services were required by the king in England.
​
Gardiner had gleaned information about the handling of matters that he wanted to be kept, as he asked the king to do, from Wolsey and Campeggio. At the same time, Wolsey instructed Gardiner to forge a document for the pope to sign and seal; however, Clement was not fooled by that ruse.

Catherine of Aragon and the brief LP 5211
King has heard with great grief of the death of Pope Clement LP 5269
​Instructions to ambassadors for obtaining Wolsey's election to be the new pope LP 5270
Wolsey's personal letter to Gardiner ​concerning his advancement to the Papacy LP 5272
​The pope is not dead LP 5274
Pope regrets that, in consequence of his illness, he could not give the King's ambassadors an audience LP 5474
Gardiners's appraisal LP 5476
​Matters to be kept from Wolsey and Campeggio.See Stephen Gardiner and The Tudor Reaction by James Arthur Muller page 30 and notes page 344
​Instructions to 'Mr. Stephen, shall promise to write it out afresh' a forged document LP 5523
​