Part Twenty - Two
​
​  The Trial Begins –  Francis Finished in Italy – Treaty of Barcelona –Divorce Trial Adjourned and Called to Rome – Wolsey and Brandon Clash – Gardiner Appointed Principal Secretary
​
​
Wolsey was in trouble whichever way he turned: trouble from Catherine; trouble from Charles, who had detested him for years; and trouble from the many English people across all classes who now ridiculed him. Anne Boleyn, for now, suffered him. Henry, however, remained his friend. He needed him and was fearful of the world without him.

But there were members of the nobility and gentry who were sharpening some very long and deadly knives to use against him.

The clock had been ticking for some time. Previously, in April 1528, Margaret Habsburg, Governor of the Netherlands, had sent word with the Windsor Herald to Wolsey that some people in authority were making great efforts to achieve peace between Charles and Francis without the cardinal’s interference or that of his sovereign. She confirmed these intentions to him directly in a personal communication a couple of days later. Negotiations continued until the spring of 1529, by which time they were sufficiently advanced for the French and the Imperialists to meet face-to-face that summer.
​
The legatine trial at Blackfriars in London began on 18 June 1529.
The Summit at Cambrai 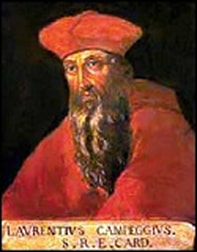 Lorenzo Campeggio
At the same time, the summit at Cambrai began. Cambrai, situated on the frontiers of France and the Netherlands, was a small ecclesiastical independent state chosen for the convention because of its neutrality.

Such was their animosity towards each other, however, that when the time came, neither Charles nor Francis was present to face the other in person.

A harried Wolsey was desperate to be there; he had staked everything on friendship with France to realise his papal aspirations and now feared that Francis’s mother would, on her son’s behalf, desert him and make peace with the very man he abhorred, the man against whom he sought revenge and had worked for years to topple. The frustrated cardinal, even he, could not embody himself in two places at the same time. A few days before the Blackfriars trial went underway, he encouraged the French ambassador, Jean du Bellay, to engineer a delay to the Cambrai talks until the divorce trial was finished by prolonging the war against Charles in Italy. He wanted French military action to capture Milan, Parma and Piacenza.
‘never merry in England whilst we had Cardinals amongst us’ 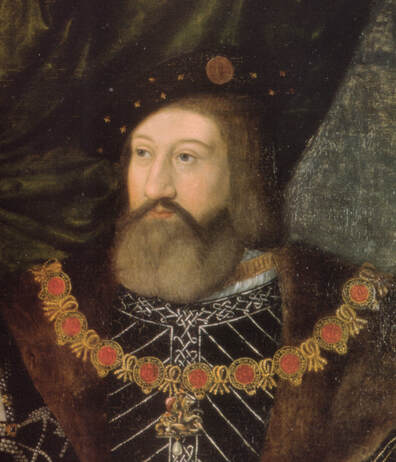 That was not to be. Henry and the Boleyns kept Wolsey in London and sent Cuthbert Tunstall, at that time Bishop of London, and Sir Thomas More to Cambrai instead.

Francis did actually make one more effort to conquer Milan, but his forces were cut to pieces at Landriano on 21 June 1529.
​
As a consequence of this the latest French failure, the pope announced that he had quite made up his mind to become an Imperialist and to live and die as such.

Eight days after the Battle of Landriano, the Treaty of Barcelona was signed. The treaty was a pact between the pope’s Medici family and Charles’s Habsburg family. To seal the arrangement, Pope Clement’s nephew Alessandro de’ Medici, Duke of Florence, was married to the emperor’s illegitimate daughter, Margaret of Parma, another future regent of the Netherlands. Medici rule was to be re-established in Florence, and Wolsey and Campeggio’s commission to try Henry’s suit for a divorce from Catherine of Aragon was revoked.

On 6 July 1529, the pope broke the news to Casale that he had decided to allow Catherine her appeal and therefore call the case to Rome.

Campeggio and Wolsey knew the news was on its way – it was an integral part of the charade; however, Campeggio played his part to the full and announced to a shocked legatine court on 23 July 1529, before the official notification arrived from the pope, that he would not make a decision and would adjourn the case for the duration of the summer holidays, as was the legal practice in Rome. Charles Brandon was furious and heckled that it was ‘never merry in England whilst we had Cardinals amongst us’. This was a futile loss of temper because at the end of July, soon after the court was suspended, news of the appeal reached England and the legatine court never sat again.

Anne Boleyn was even more trenchant in her letter to Wolsey.
​
On 28 July, Stephen Gardiner was appointed as Principal Secretary to the king. He would now live in attendance on the king.
​