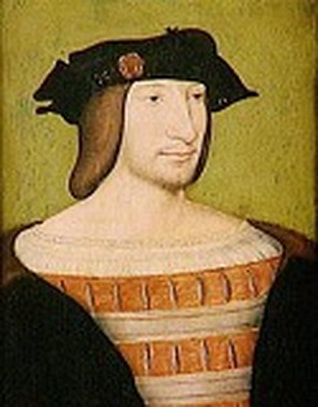 Francis I King of France
Upon coming of age on 5 January 1515, the future Charles V became Duke of Burgundy, and Margaret Habsburg, for now, stepped aside as ruler of the Netherlands.

Francis I was crowned King of France in the Cathedral of Reims on 25 January 1515, with Claude as his queen consort. He was twenty years old, a similar age to Henry VIII.

In England, Thomas Wolsey received news that on 10 September 1515 he had been elected as a cardinal.

Within months, Francis marched his army to Milan, defeated the Swiss army at the Battle of Marignano during 13 and 14 September 1515, and reclaimed Milan. The conquest strengthened his influence over the pope, and he renegotiated the extent of papal authority allowed in France, which was later sealed as the Concordat of Bologna on 18 August 1516.

In a crucial strategic move in 1515, Charles sent Adrian Florensz (Adrian of Utrecht, who later became Pope Adrian VI) to Spain to persuade Charles’s grandfather, Ferdinand, that his Spanish lands should be inherited by Charles and fall under his rule and not that of Charles’s Spanish-born younger brother, Ferdinand, whom his grandfather seemed to prefer. Adrian was sufficiently persuasive and succeeded on Charles’s behalf, an act for which in forthcoming years he gained high reward. 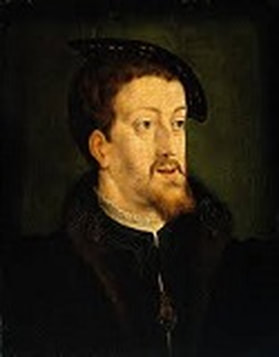 Charles V King of Spain
Catherine of Aragon gave birth to a daughter, the future Queen Mary I of England, on 18 February 1516. Sadly for her, she must have received the news that her father – Charles’s grandfather, Ferdinand – had died only shortly before the birth, on 23 January 1516.

Charles was now King of Spain, but he was of course still in the Netherlands, and so Adrian ruled in his absence.

Relations between the Habsburg, Trastámara and Valois dynasties were for the most part volatile, but the Treaty of Noyon, signed on 13 August 1516, allowed Charles to make the journey between the Netherlands and Spain without interference from France (which separates, geographically, these two countries). He set sail for his new kingdom, escorted by forty ships, on 8 September 1517.

Margaret Habsburg again assumed the governorship of the Netherlands and Charles arrived in Spain at an inlet near the village of Villaviciosa on 18 September 1517.

On 31 October 1517 in Saxony-Anhalt, Martin Luther nailed his ninety-five theses – against clerical abuses including nepotism, simony, usury, pluralism and the sale of indulgences – to the door of Wittenberg church.

The Christian faith was under attack from within – again. 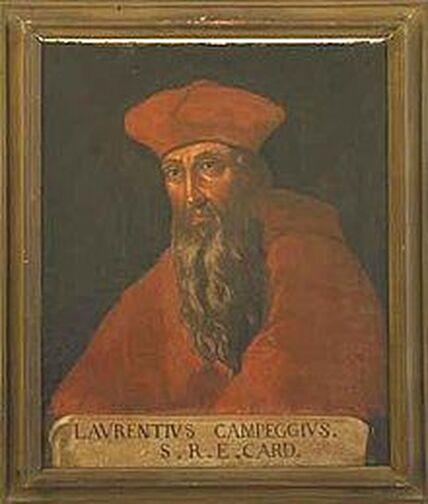 ​Cardinal Lorenzo Campeggio
Notwithstanding, at this crucial time Pope Leo X called for a crusade against the Turks.

Appealing to the new young princes, Leo’s plan was for a truce to be declared throughout Christendom, and he was to be the arbiter of disputes. Emperor Maximilian and the King of France were to lead the army; England, Spain and Portugal were to furnish the fleet; and the combined forces were to be directed against the enemy of the church at Constantinople. So, on 6 March 1518 in Rome, Leo X declared a five-year truce.

To promote the declaration, he dispatched four legates to the corners of Christendom. On 15 April 1518, one of them, Cardinal Lorenzo Campeggio, set out for England as a legate a latere. As a legate, he was of a higher rank than Wolsey. Henry had been appealing to the pope since 1514 to promote Wolsey to that status, but, in fear of upsetting the French, Leo had avoided doing so.

As de facto ruler of England, Wolsey seized his chance to become the pope’s alter ego. He had previously harried Henry to affirm that no higher-ranking foreign officer of the papacy would be admitted into England. As a result, Campeggio would have to wait at Calais – wait and wait for as long it took – for Wolsey to be promoted by Leo.

After all, it was not Wolsey’s idea, and anyway, he had devised a better strategy for Christendom to follow.
​​

Concordat of Bologna
Martin Luther's Ninety Five Theses
Definition: Cardinalate (plural cardinalates) :-
The dignity and ecclestiastic office of Roman Catholic cardinal,the cardinalate ranks equal to a secular prince of the blood‎
Wolsey's election to cardinalate LP 892 and 893
​Wolsey thanks Silvester, Bishop of Worcester LP 894
Silvestro de' Gigli Bishop of Worcester,resident in Rome,was the second of three Italian absentees to hold the see before the Reformation
Begs Worcester [de Gigli] to remember his other suits and desires LP 895