​Brothers Act to Secure Their Future
​

Food and Alcohol would Kill Him Instead 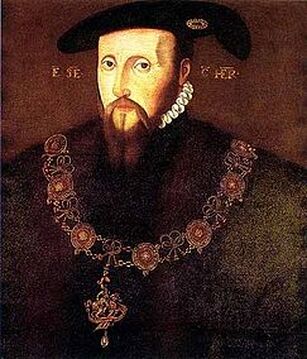 Henry VIII’s health, both mental and physical, had been the subject of international discussion for some time. The French ambassador offered his opinion that ‘this King’s life was really thought to be in danger, not from the fever but from the leg, which often troubles him because he is very stout and marvellously excessive in drinking and eating, so that people worth credit say he is often of a different opinion in the morning than after dinner’.

Surely this ‘marvellously excessive’ king, whose intrinsically impaired judgement was exacerbated by drink, was nearing the end of his life. If the war did not kill him, the food and alcohol would instead. There was every possibility that if Henry VIII made it to France he would return in a big wooden box.

The Seymours began to manoeuvre. The brothers of deceased Queen Jane and uncles of the five-year-old Prince Edward, heir to the throne, prepared to take control of the realm upon Henry’s seemingly imminent death.

The Seymours claim to rule, albeit legitimate, was far from secure, tenuous even, because it wholly depended on their young nephew. It was Edward or nothing – they had no spare – and with the king in such poor and declining health they chose this time to act, protect Edward’s future and thus strengthen their own positions. The possibility of Catherine Howard bearing a child as a rival claimant to the Seymours’ protégé had given them some cause for concern but a legitimate child from that union had been unlikely; anyway, by now it was a thing of the past.

The Seymours, of course, were not rid of the Howard threat altogether because Princess Elizabeth was a blood relative.
​ 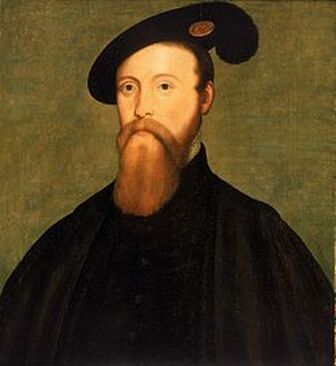 Thomas Seymour
​A significant risk to their ambitions had at one time come from Scotland, in the descendants of Henry VIII’s sister Margaret. Her son James V, a grandson of Henry VII (the founder of the Tudor dynasty), had married Mary of Guise in 1538. They had produced two half-French sons: James, Duke of Rothesay, and Robert, Duke of Albany, who naturally were Henry VII’s great-grandsons. However, both had died, on the same day, 21 April 1541, and those sad, untimely deaths had the effect, so long as the Scottish king and queen remained childless, of eradicating a Scottish Tudor claim from north of the border.

However, they did not remain childless.

In the spring of 1542, in the midst of the talk of war against France, news arrived in England that the Scottish queen was pregnant again.

Thomas Seymour was at the court of Charles’s brother, Ferdinand, in Vienna, but during the summer of 1542 was he summoned home.

Now trouble brewed on the Scottish borders. The difficulties there involved a battle on 24 August 1542 at Haddon Rig near Kelso. The Scots defeated the English and had their leader, Sir Robert Bowes, taken prisoner. To escalate matters, the Scots refused to ransom him.

The English exacted revenge at the Battle of Solway Moss on 24 November 1542, when Thomas Howard trounced an army led in person by the King of Scotland. On 8 December 1542, King James (who survived the battle) and his French wife became the parents of a daughter named Mary; she of course was Henry VII’s great-granddaughter.
​
Days later, on 14 December, in an occurrence shrouded in mystery, her father, the thirty-year-old James, died, and baby Mary became Queen of the Scots.