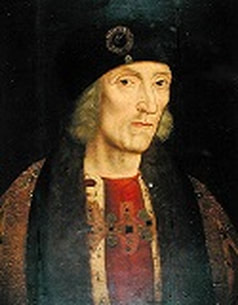 Henry VII
Henry VIII became King of England on 21 April 1509 at the age of seventeen.

His father’s army had killed King Richard III twenty-four years earlier, on the battlefield at Bosworth, and there Henry VII won the crown of England for the Tudors.

Prince Arthur, Henry’s older brother by some five years, was born to be the next Tudor king. From the cradle, he had been groomed for kingship.

On 14 November 1501, Prince Arthur married Catherine of Aragon in a union arranged by Henry VII and Arthur’s grandmother, Lady Margaret Beaufort, Countess of Richmond. The alliance was agreed with Catherine’s parents, Isabella I of Castile and Ferdinand II of Aragon, and it was intended to strengthen an Anglo-Spanish pact against France. The houses of Tudor and Trastámara were thus allied against the French house of Valois.

Arthur had been invested as Prince of Wales in 1489, and the newly wedded prince, with his young bride, was serving his father at Ludlow, presiding over his principality, when he died there on 2 April 1502. The young prince was buried at Worcester Cathedral. 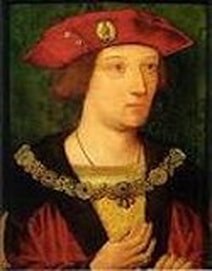 Prince Arthur
The death of the Prince of Wales, briefly mourned, created dynastic, legal and diplomatic problems over the widowed Catherine’s position within the English royal family.

After Henry VII died in 1509, Lady Margaret assumed control, and to preserve the Tudor and Trastámara bond the matriarch inveigled her living grandson into marrying her deceased grandson’s widow. Papal dispensation was required for this atypical marriage, but, for these two powerful dynasties, authorisation from an acquiescent pope, albeit contentious, was granted.

Lady Margaret, who had played no small part in Henry VII’s rise to kingship, lived a little longer and so witnessed the new king and queen being crowned in a joint coronation at Westminster Abbey on 24 June 1509, but she died five days later. 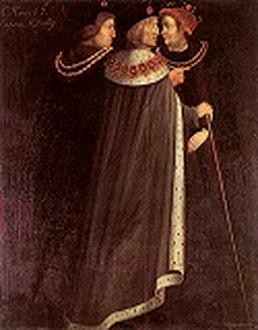 Empson and Dudley
In the years since the Battle of Bosworth in 1485, Henry VIII’s father and grandmother had revived the fortunes of what had been war-ravaged England. The expense of conflict had for the most part been avoided: the government was efficient, the Tudors were largely respected abroad, and the king’s coffers were full.

Throughout the realm, however, the financial administration that Henry VIII inherited was unpopular because of what was deemed excessive taxation. Two of the administrators responsible for this harsh fiscal regime were Sir Richard Empson and Edmund Dudley. To make way for a fresh start to the new reign, they were offered up as culprits and executed in 1510.

At that time, international treaties lapsed with the demise of the monarch unless the succeeding ruler renewed them. Young Henry’s council continued with its established foreign policies and renewed all those treaties his father had left. For two years, Tudor England avoided involvement in the wars carried on by those in Christendom striving for independence or expansion of empire.
​
Henry VIII inherited an England that was, compared with some of the troubles of the previous century, relatively peaceful and wealthy.
​